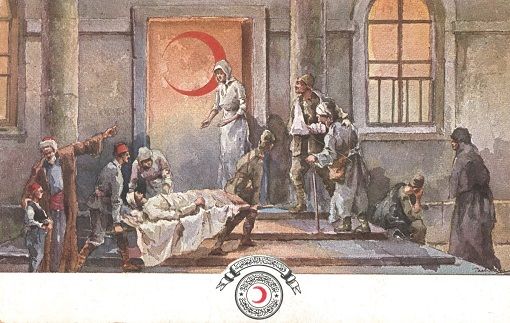 On 11 June 1868, Türk Kızılay was established with the name "Ottoman Aid Society for the Wounded and Sick Soldiers",

The wars and major migrations that started in the Ottoman lands in the early years of the 20th century made it necessary to quickly address pressing concerns. The establishment of the Ottoman Aid Society for the Wounded and Sick Soldiers became the nation and state’s most important support element as it was an apparatus to effectively treat the health problems of soldiers fighting on every front during the Ottoman-Russian War, Tripoli War, Balkan Wars, First World War and the War of Independence, take care of the wounded, and meet other needs such as nutrition and clothing.

The Hilal-i Ahmer Society continued to develop rapidly by opening representative offices in foreign countries, especially in places with a concentrated Muslim population. Eventually, with donations, revenue from member subscriptions, exhibitions, handcraft sales and other similar activities, it became stronger economically and transformed into a functional institution.

Kızılay is our compassion pioneer that has been operating in many fields to relieve human suffering since its establishment in 1868.

Kızılay's work in the field of culture and arts has a long history that begins with postcards, stamps, and Hilal-i Ahmer flowers that are put up for sale in the first days of Eid Al-Fitr.

Combining painting and poetry, postcards exhibitions became a continuous tradition that started in the Ottoman Empire and was then inherited by the Republic of Turkey. Magazines and posters published to deliver messages to large audiences are important parts of Kızılay's acquis in the field of culture and arts.

Use of Cookies
For more detailed information about the purposes of processing your personal data by Kızılay Kültür & Sanat, we recommend you to read the Cookie Policy Clarification Text
ACCEPT COOKİES